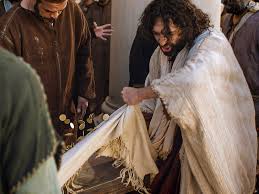 Elias sat at his booth in the marketplace with great anticipation.  This was the best season of the year for business.  His family had owned this place right inside the front door of the market for years.  His father, and his grandfather had brought him up and taught him the way to help people with their offerings to the Lord.  They were shrewd merchants who knew exactly what was needed to make a good living. Elias had learned well.

He was a small man, standing 5’3” short and stocky.  His mustache rolled over his lips so it was hard to see the top one as he spoke with his rough, gravelly voice.  His eyes were bright and looked very honest as he would look out over the people coming into the marketplace.  He had a wife and three children to care for, so was hoping for a good day on this bright sunny morning.  On a normal day he would help over 500 people with their offerings, but this was no normal day.  It was only 10:00 AM and he had already sold 300 sheep and 200 pigeons to people who had imperfect offerings, or so he said.  In reality, he had tricked those people by telling them their offering was not pure enough for the sacrifice, and sold them one of his sheep.  But then once the people were out of sight, he would sell their lamb to an unsuspecting couple, calling it pure.  He did this all day long and made good money as a result.  His table sat with a large balance to weigh the money, which was much faster than counting it.  However, his weights were slightly altered in his favor, so he made a little extra money with his unjust weights also.  And being right inside the temple gates made him one of the first merchants people saw.

It was three days before the Passover, and Elias knew there would be throngs of people in Jerusalem for this blessed time of year.  He was daily in the temple, and business was always good.  But this year was different, and Elias knew this was going to be a boom for business.  He had heard the commotion the day before as a man named Jesus came into town bringing a huge throng of people. There must have been 10,000 who greeted him at the main gate.  They shouted Hosanna and laid palm branches before him.  It seemed they thought he was some kind of King.  Elias had heard stories of him healing people and teaching extraordinary lessons.  There was even a rumor going around that he had raised a man named Lazarus from the dead.  It seemed many were running after him, hoping he would set up some kind of kingdom.  Elias scoffed at the idea.  It was ludicrous.  But he knew all those people would eventually have to come and offer their burnt offerings to the Lord during Passover, and he was grinning ear to ear.

A young man walked up to his booth without a sacrifice, and Elias knew he would need one this day.

“How can I help you, young man.”  Elias softly said.

The young man looked excited.  “I need a pigeon for the offering today, sir”

Elias went over to his pigeon cage, opened the door and was about to take one out when a herd of people swarmed into the marketplace, led by a man with a white tunic on.  All the people were shouting “Jesus, Jesus” like he was something so special.  They were a wild bunch and the birds in the cage starting flying around like crazy, making it hard to get one out.  Jesus stood there, looking out over the marketplace and all the booths that were set up to sell sacrifices to the people.  People were buying and selling just like he was about to do.  It was an eerie scene; one he had never encountered before.  The whole crowd had stopped behind him, yelling his name and holding out their hands to him.  For a moment it seemed time stood still as Elias reached in to get one of the pigeons for his customer.  Before he could grab one, this man called Jesus walked up to his booth, picked it up and turned it over.  The balance and money went flying all over the ground.  Elias, shocked and furious turned to try and save things and the birds starting flying out of the cage.  There was no hope to recover them as they scattered far and wide.  He scrambled on the ground, looking for his money as others in the crowd started to pick it up and run off with it.

He heard the commotion as Jesus proceeded through the marketplace doing the same to every table. The noise was unbearable.  Merchants screaming at him to stop, people scurrying to try and get the money that fell to the ground, sheep running all over bleating as they were freed from their cages and pigeons everywhere, cooing and making a mess.  Total chaos took over the marketplace.  But above all the noise and ruckus I could hear Jesus shout out “It is written: my house shall be called a house of prayer, but you have made it a den of thieves.”  How dare he make such an accusation, Elias thought.  Elias was helping people get what they needed to present an acceptable offering to God.  So, he made a little profit.  That was what fed his family.  Now He would have to try and find all his sheep and pigeons again – an impossible task.  His money was gone to the hoards that grabbed it off the ground.  What he thought was going to be a great day turned into a disaster.

I wonder how many of us need our lives overturned.  We are busy in the church doing what we have always done not realizing God has a bigger task for us.  We have become so tuned into our own little way that we don’t realize we have walked out of the will of God for our lives.  Sin has crept in and we have allowed it to, justifying our deeds by our seemingly righteous acts.  While we teach Sunday School, or lead worship, or serve on the church board, or lead the ladies’ group in the background we are satisfying our own selfish sinful desires.  No one around us knows what is going on beneath the service of our seemingly holy lives.  This was Elias.  This was me.

There was a time that I was so eaten up with pride that I could easily defy God and justify it in my own mind.  I served in many roles within the church and no one knew that sin knocked at the door on a daily basis, and that many days I let it in.  Elias sold lies on a regular basis, justifying it as providing for his family.  I lived a lie, justifying it by the good works I was doing.  There was no excuse for my behavior, but I gave plenty of excuses.  This went on for years and then was discovered.  After a period of repentance and renewal, I turned right back to it, as dog returns to his vomit.  5 more years of deceit went by before it was discovered again.  This time God overturned the tables in my life.  My marriage nearly ruined, fired from my job and rejected from my church, I went on a sabbatical that changed my life and set my course straight again.  God redeemed me once again through His overwhelming mercy and grace.

If you have sin inside the door of your life, don’t wait for Jesus to come and overturn the tables.  This can cause deep losses on your part.  Tackle the problem now.  Ask for forgiveness now.  Repent now.  Turn your own table.  You will thank yourself for it.  Because if Jesus comes in and overturns the wrong, you could lose everything, just as Elias did.