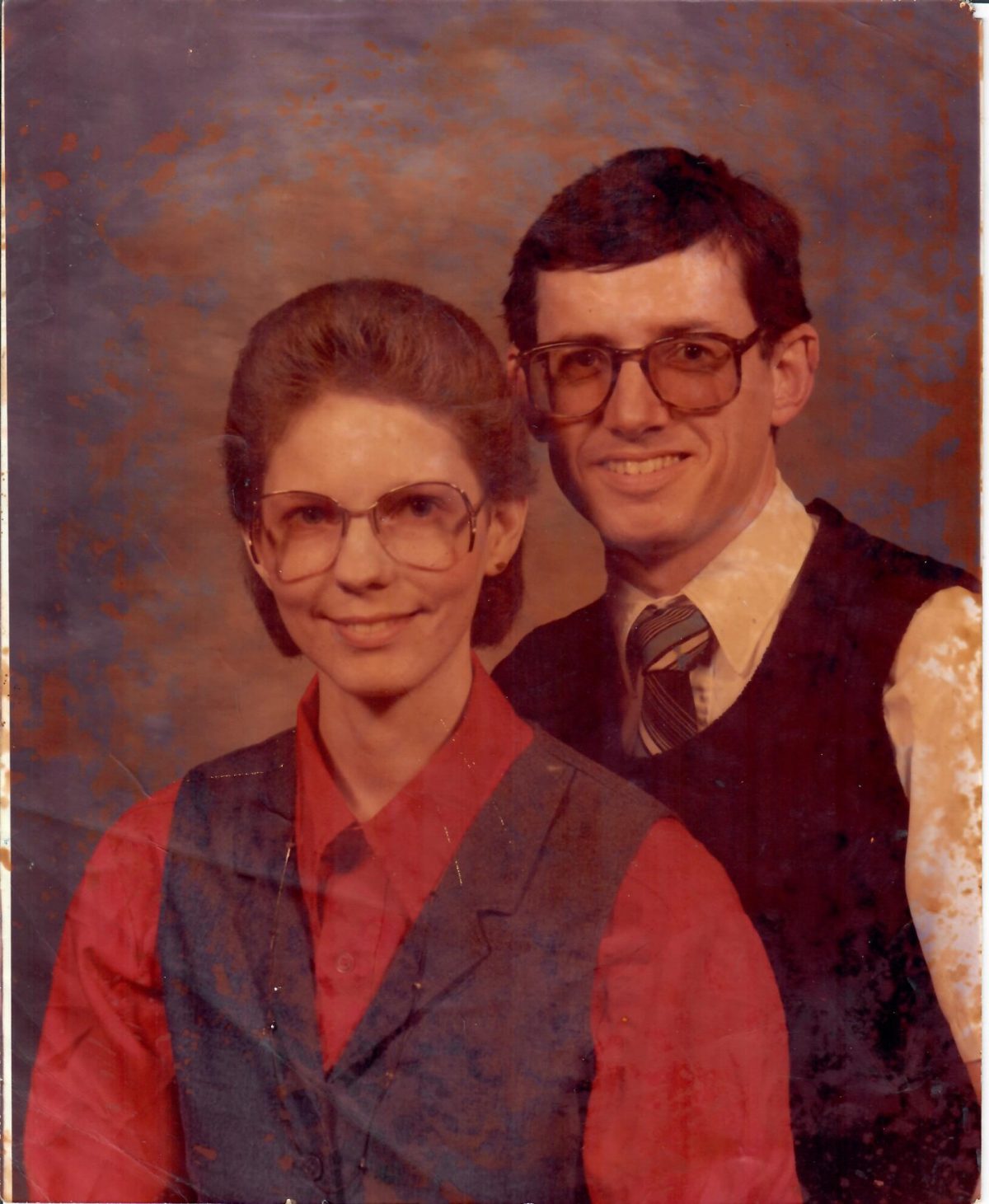 After I got saved in Iowa, I returned to Massachusetts.  My life and lifestyle drastically changed in the next two years. My language cleaned up. I rose to prominence in my job. I cut my hair to look like a normal human being. I started attending church regularly and getting involved with different groups. I even kind of had a girlfriend in the church. It was late spring in 1978 when I went back to Iowa to visit my friend again.

When I walked into his house he was on the piano and was playing a song. He asked me if I knew the song.

He said “That’s right” and then he immediately started playing another song. “Do you know this song?”

I said “No I don’t.”  He moved over on the piano bench and motioned for me to sit down. There was a hymnal open on the piano and I looked at the title of the song – Blessed Assurance.

“I was hoping you would help me sing the song for church.” He said.

“Sure, no problem.” I answered.  We sang together many times in church and in high school so this was nothing new for us.

We started learning the song and he said “I’ll take the first verse; you take the second verse and we can do the third verse together.” So we practiced it that way a few times.

“You really need to memorize it.” He said.

I said “Well, since I only have to memorize two verses and a chorus, I can probably do that.”

We took a break for a little while and then came back to practice.

My friend piped up.  “Oh, by the way, we’re going to sing this on television.”

I looked at him in surprise.  “I thought you said it was for church?”

“It is” He answered.  We televise our church service.  The recording is done tonight.”

“Well, you got me hooked now.  Let’s do this.” And we continued practicing.

We headed down to Kirksville, Missouri to the TV station with a whole bunch of other people. I think they’re were a dozen of us altogether in 3 different cars. Everything went well at the recording session and we headed back home around 9 or 9:30. We were all hungry, so we stopped at a little restaurant on the way back. At the table I sat beside the pianist from the church and her husband. She had her younger sister with her and I leaned over to the pianist and asked her

“How old is your sister?”

“You wouldn’t happen to have a sister that’s a little bit older, would you?” I asked.  To be honest, I didn’t know why I asked that.  I had a girlfriend back home, but something prompted me to ask.

“Why yes I do.” She answered happily.

Well, have her in church tomorrow!” I said.  I didn’t ask, I told her to bring her to church.

We finished eating and headed home to hit the sack for the night.   I am told that when Joyce, the pianist, talked to Janeen, the other sister, Janeen was not really interested in going to church.  She got off work at 3 AM, and was going to sleep in.  But Joyce had a way of making Janeen do what she wanted.  The next morning, I headed to church and watched as Joyce walked in with her other sister. They sat right in front of me and, wouldn’t you know that I didn’t say a word to the young lady that I’d asked to be there. At the end of the service I walked back to the guest book that was at the back of the church and I signed it and wrote that I was visiting from West Boylston, Massachusetts. Joyce’s sister came up beside me and said “You came a long way to come to church today”

I said “Yes I did.” and I walked out the door. Joyce told me afterwards that at this time her sister was furious with her but she convinced her to come back to the evening service.

During the afternoon, my friend taught me a few new choruses because we were going to lead the congregation in worship that night.  We had a wonderful time learning those worship choruses and were ready to go to the service. I walked into the church and the Joyce’s sister turned around and looked at us. When our eyes met, my heart fluttered. Something happened. I walked up to the front and we lead the worship service and sat down.

After the service my friend was having a gathering at his house and guess who was invited. Yeah, you got it right.  The mother and father, Joyce and her sister were all there.  It was a nice gathering and I learned the sisters name was Janeen.  At the end of it everybody was talking about a fellowship meeting of churches the next night. They wanted me to sing a solo since I was visiting.

Finally we decided that we would go. It was a night that would change my life.

We went to the fellowship meeting the next night. I sang my solo. On the way home, I sit in the backseat with the Janeen. With us in the backseat was her3 year-old nephew, Jason. I’d been a bachelor for the last 6 years and had not been around kids at all. Jason was a rambunctious kid who was as funny as all get out. And he made me laugh1 I mean really laugh!  You have to understand that for years I had not really laughed. I had made up laughs – I was the king of laughter!  I had a hundred different laughs but I didn’t have a laugh of my own. And then he made me laugh – my own laugh – and it was a wonderful feeling. My head was spinning with all that was going on.

We got back to the town where Joyce lived since we rode with them.  My friend was working at a gas station in the next town about ten miles away. I wanted to go over and be with him for the rest of the night since I was leaving the next morning. Janeen volunteered to give me a ride in her 1965 white Mustang. As we drove over to Fairfield, just out of the blue she started singing You Light Up My Life. I didn’t know what was going on that she would start singing that song for no reason, the same song my friend was playing when II walked into his house.  We got to the gas station and I got out and came around to Janeen’s side of the car. I gave her a little squeeze on the arm and said “See you later” and went inside the gas station. To this day she’s upset that I didn’t kiss her goodnight.

When I got inside that gas station I sat down in the office and I started to weep. I told my friend that I was lost. I didn’t know where I belonged. I had a great job with a wonderful future at a large company back in Massachusetts, but everything within my being was telling me that I belonged in Iowa.  I had to leave the next day early in the morning. I wasn’t sure what was going to happen or what I was going to do but I had to go back.

I headed out the next day and drove the usual route across Interstate 80. Usually when I made this trip, and I’ve made it three times before, I just slept in my car when I got tired and then headed out again.  But for some reason this time I decided to stay in a Red Roof Inn in central Pennsylvania. I got into the room and was still pondering what I should do. I reached into the drawer and picked up the Gideon Bible. in the front of the Bible there are some helps.  It said in time of decision turn these verses. One of those verses with Proverbs 3 5 & 6, which says Trust in the Lord with all your heart and lean not to your own understanding in all your ways acknowledge Him and He will direct your path. I knew beyond a shadow of a doubt as soon as I read that scripture that I was supposed to move to Iowa and marry that girl. I picked up a pen and paper at the hotel that night and I wrote her a letter. I was wise enough to get her telephone number and address before I left. In the letter, I said if you’ll be my girl I’ll move to Iowa.

I got back to Massachusetts Sunday night.  Monday morning I put in my two months’ notice at work. I had a very unique position and I know it would take that long to train anybody to take my place. The big boss called me in his office and offered me a promotion and more money.  I told him I couldn’t.  One of my co-workers joked with me and said what are you goin- g to do  – go out there and get married and have kids? I just said who knows. My mom thought I was crazy.  My brother thought well I don’t know what he thought.  All my friends wished me the best – they knew nothing was going to stop me.

Over the next two months Janeen and I shared letters and made phone calls quite frequently. We got to know each other this way. I worked on training my replacement. I worked long hours to get things caught up and organized for my replacement.  In the second week of August 1978 my friend and his wife and Janeen came out to get me. I had a station wagon full of things and that was all. Janeen and I rode together on the trip back to Iowa. I asked her to marry me 2 months later and we got married in November of 1978. We recently celebrate our 40th anniversary and have 3 beautiful daughters and five grandchildren.  The Lord has been very good to us. We are blessed.