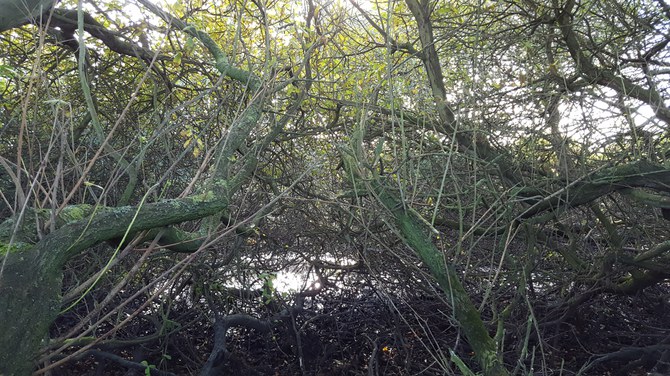 Garside’s pond was a magnet for us as kids. It was a small pond nestled in a grove of trees at the top of the hill above Peter Dees house. It sat on the side of the road right where the road took a bend. There was nothing fancy about it. Definitely no swimming – it was dark and murky. Not much for fishing either – there was a tremendous amount of algae and the growing things that would grab your line. So, what was the big attraction?

First was that it was secluded for the most part. We could hang out there and not be seen. We would play around the shoreline. One of our favorite things to do was to skip stones and see if we could skip a stone all the way across the pond. Not that the pond was that big – maybe 30 feet across. But skipping a stone that far took talent, and we became pretty good skippers! The second test was how many skips you could do with one stone. I can remember several over 10. Another stone related thing we enjoyed was throwing a rock into the middle of the pond and watching the ripples come out. We used to try and make patterns by throwing rocks into different areas. Not as exciting as today’s video games, but it kept us occupied.

Second was the tadpoles. We loved to seek out tadpoles and watch them with fascination. It wasn’t unusual for us to find a nest of eggs and take some home, and watch as they hatched and became tadpoles. I can’t remember if we were ever able to keep one all the way to the frog stage, but I’m sure we tried several times over. It’s a fascinating thing to do, especially for a 10-year-old. The little eggs would first sprout a tail, then some front legs, and then the rear legs. We could watch them for hours.

But the biggest reason we hung out there was the bullfrogs. These beasts were gigantic and we were hunters. Catching a bullfrog was a talent we developed over time. Ordinary frogs were hard enough. You would see them on a lily pad, or along the shore, and you were sure you could sneak up on them, only to have them jump before you got there. It took stealth to capture even an average frog. And we caught plenty of them.

But the bullfrog, now that was a catch that made you special. These bullfrogs would trumpet their presence with a loud Ribbit that could be heard miles away – I’m sure! And you could kind of tell where it came from. Slowly you would creep that direction listening to him bellow out his presence. Then, as you got closer, no matter how quiet you were, he’d go silent. If you were really good, you might get close enough to see him sitting there. But you had to be fast to catch him. And catch some we did. Catching a bullfrog was a badge of honor to us. I will not tell you what we did with these beasts when we caught them, but it was not very humane – not humane at all.

I was back in Massachusetts a couple years ago, and we went by that old pond. It was much smaller than I remembered, almost more like a marsh than a pond anymore. The trees and brush had overgrown much of what was the pond many decades ago. There was no place for kids to play around the shore anymore – there wasn’t even much of a shore. It made me sad to see one of my favorite places become so un-useful.

Jesus told a parable about a sower who went out to sow his seed. Some seed fell on hard ground and the birds just ate it up. Some fell on rocky ground and never took root. Some fell on ground that then sprouted weeds that choked out the seed. And some fell on good ground and brought a good harvest. Then Jesus explained that this was really about sharing the gospel. Some will just not receive it – like the seed that fell on hard ground. Some will quickly accept the word, but the word will never take root in them and they will fall away., like the seed that fell on rocky ground. And some will accept the word, and start to live for Christ, but will turn away because of the cares of this world, much like the seed suffered at the hand of he weeds. And of course, some accept the word and go on to live for Christ and bring forth a harvest.

The pond reminds me how easily the world can encroach on the beauty of our salvation. It happens slowly, as little things start to distract us from serving the Lord. Maybe something comes up on a Sunday morning that causes us to miss church. Maybe our devotional time is disappearing beneath work or family pressures. Whatever it is, our time with God gets the short end of the stick. The world creeps in, just like the plant life crept into the pond. If we are not careful, our spiritual life can become overgrown with those other things, and we will find ourselves mediocre at best.

Examine your life, as I have been mine, and see where the world is creeping in. Then start to take steps to clear back the weeds, pull the muck out of the water, and restore the pond, restore your life, to a life-giving force once again. It can be done!