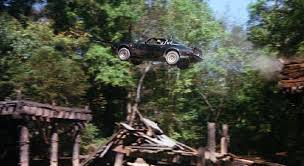 As a crazy 19-year-old, I used to do some wild things with my car.  I am not going to get into all the wild things we did in this post, but maybe I’ll revisit those days sometime in the future.  This post will concentrate on the bridges we used to jump.  You heard me right – jump.

I loved to drive fast – really fast.  On the Interstate, I hated it when anyone would pass me.  It was pedal to the metal all the way.  We were rarely sober too, so that heightened the fun.  A bunch of us would pile in the car and just go.  It didn’t matter what day or what time of night, we were just going to have fun.  We explored the back roads all over central Massachusetts and knew every one of them.

One spot we particularly enjoyed was full of dirt roads that had old bridges which crossed the streams throughout the marshy area.  I had a 1965 Ford Fairlane that I had bought from my Mom for $1.  The reason she sold it to me so cheap was that I had gotten into an accident with it and the radiator needed replaced, plus some body work on the front end.  She bought a newer car and I got the one I wrecked.  I loved that car mainly because 1 could jam 5 other friends in there and we could drive and party.

One night we decided to ride off to that marshy area and just cruise around.  There was one particular bridge that offered the most fun.  The road rose sharply on both sides of the bridge, and the actual wooden bridge was about 25 feet across.  After driving over that bridge a few times, I told my buddies that I thought I could completely jump that bridge!  They all laughed and dared me to do it.

We had practiced similar stunts on a dirt bike track.  My friend went one direction in his VW Bug car, and I went the other,  We sped around that track, passing each other going the opposite direction, over the hills and valleys of a dirt bike track.  There were some close calls, but we always came out all right.

I could not resist such a dare.  We lined up with the bridge as far back as we could. Then I stomped on the accelerator, speeding toward that rise that came before the bridge.  There was absolutely no view of the other side – only the top of the hill and a glimpse of the railing on one side of the bridge.

Faster and faster we went, the other guys in the car whooping and hollering. Dust was rolling up in the air as we sped up the hill.  We could only hope another car was not coming the opposite direction.  There was no view to see if there was, and once we hit the top t would be too late to back out.  If there was another car, we would have to hope to jump it as well!  (There was little traffic on these roads, so we felt fairly safe)

When we hit the top of the hill, we were going about 70 MPH on that dusty dirt road. The car left the ground for what seemed like 30 seconds (it was actually only 1 or 2).  We were off the ground until all four wheels hit the other side at the same time.  We did not hit wood, we hit dirt. We had made it!  WE never tried that again, though.  The thud at the end was so forceful we thought we would blow all 4 tires, but we didn’t.

Today, daredevils do different things with bridges.  They don’t jump over them – they jump off of them!  That is something I would never do!  With a bungie cord attached, people jump off perfectly good bridges, diving downward just the right distance so they don’t hit the ground below, and then rocket back up to the top again.

I am not sure the science behind measuring the bungie cord, but it has to be precise. I have seen videos of people jumping off bridges 100 feet or more above the surface below.  Since the cord stretches so much, it must take some real math figuring to know how long that cord has to be before it is stretched out.  These people put a lot of trust in that cord, just as I put my trust in my car to jump over the bridge.

Bridges have much better purposes than this! They are built in strategic places so that two sides of a road can connect once the road is built.  They can be built over culverts, rivers, streams, roads, railroad tracks – anything that would impede the continuous flow of the road.  The can be over the obstacle or under it.  They serve a great purpose in our world.

Just imagine if we did not have bridges!  Commerce would literally stop all over this great nation. All business would have to be done on a local level.  The Interstates would have full access of side roads, and could only travel to the next body of water that crossed it.  Most of us would not drive on vacation like we do now because it would be extremely difficult to get where we were going.  Our little town here has the river on three sides of town – there would only be one road out.  I love bridges!

There is another gap that needs a bridge.  It is the gap between sinful man and a Holy God.  It is a big gap!

When God came down on the mountain to speak the people, the presence of Him was so overwhelming, the people told Moses they did not want God talking directly to them anymore.  They wanted Moses to talk to God and tell them what He said.

The Israelites had to offer animal sacrifices to cover their sins, and they still could not approach the presence of God in the Holy place.  Only the high priest, one time a year, could go into that Holy Place.  Even then, as consecrated as he was, they tied a rope around him in case he should die in the presence of God.  The gap is big!

God desired to have fellowship with His people, with all mankind, but He would not be around their sin.  So He sent His only Son, Jesus.  Jesus taught us the ways of God and then gave His life for our sins.  He suffered a cruel, torturous death to take the punishment of sin upon himself.  When He died on that cross in our place, He became a bridge to connect us to God.  The gap now had a bridge!

This bridge must be crossed in order to enter heaven.  You must accept the bridge and leave all your sinful ways behind, because sin cannot cross the bridge.

That if thou shalt confess with thy mouth the Lord Jesus, and shalt believe in thine heart that God hath raised him from the dead, thou shalt be saved.

10 For with the heart man believeth unto righteousness; and with the mouth confession is made unto salvation.

It’s quite simple. Ask Jesus to be your Savior and Lord, then live for Him and follow His ways, and you may cross the bridge.  If you do not, the gap will remain between you and God and the bridge will not be available.

Those of us who call ourselves Christians must tell others about this bridge.  They must know that the gap is too great for them to jump, to high for them to bungee.  There is only one way to bridge the gap, and that Is Jesus Christ.  No other bridge exists.